Built around a fully modelled universe with hundreds of thousands of systems and their associated planets, players can build thriving space empires. Join a faction to work with others to further your factions goals, or just fly solo with your own purpose.

A completely open research system allows incredible customisation and personalisation of your ships and fleet compositions. Test your brains and brawn against the best the universe has to offer. 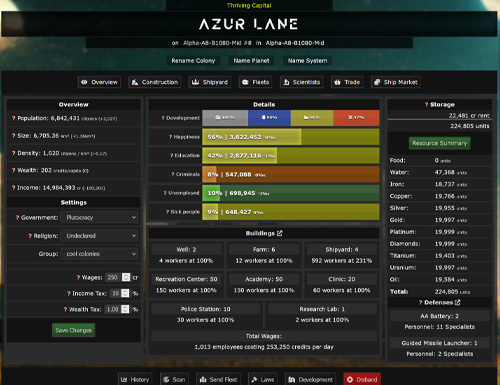 Spread your empire throughout the universe, seeding untold planets with your citizens. With every planet being different, every colony becomes a different challenge to the one before.

Do you want to build a scientific outpost? a military base? or just pump your apartment blocks to the rafters with as many people as possible?

Our interface is fully responsive, resizing to fit whatever device you want to use. Portrait, landscape, phone, tablet or a large widescreen monitor, everything resizes to fit your situation. 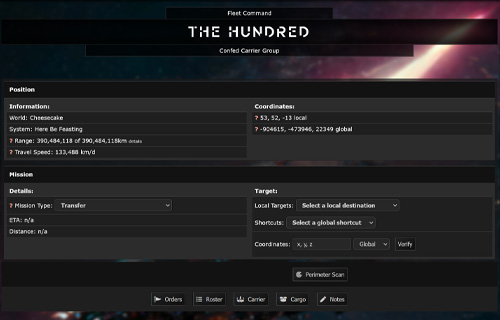 Using the extensive and fully player controlled research system you can continuously improve your ship technology.

Build a fleet using the myriad of ship classifications, coordinate with your team mates to launch an extended military campaign and watch your enemies crumble.

All ships are player designed and fully customisable, from the engine it uses to the guns it carries.

Fill in the details below and we'll cross the T's and dot the lower case J's on getting you in charge of your own Space Empire.

Login name
This is different from your username, used only for logging in. 5-12 alphanumeric characters.
Username
Your name as you wish to appear in-game.
Empire name
What would you like your intergalactic denizens to rejoice in the name of?
Password
Please use something smart.
Password confirmation
In case you typed it in wrong before.
E-mail address
So we can confirm you are a biological life mass.
Pick a team (click to select)

This faction currently has 18 rulers.

Without ties that bind or obligations to anyone, every Lost civilization is unique and independent from the rest of the universe. Finding no common ground with the other factions, the Lost have decided to eke out an existence cut off from the major ruling powers, and have to deal with the hardships of a sometimes harsh and unforgiving universe by themselves. Often occupied more with survival than ideals, the Lost will always have a hard uphill battle ahead of them. They will begin in one of the buffer galaxies, without a faction homeworld, lacking the advantages of an organized group.

This faction currently has 13 rulers.

The Association sought to distance themselves from the chaos that plagued the Crimson Moon Accord some decades after their arrival. Led by Demerzel, they set out to find a peaceful place in the galaxy far away from the skirmishes, where they could pursue their true passion: Unlocking the mysteries of existence.

Few members of this faction focus on anything other than research.

This faction currently has 12 rulers.

The Alliance are said to be the oldest of factions. Warlike, short tempered, and always looking for a fight. They have become more moderate over the centuries, but their desire for battle is still brewing. The old warriors remember the story of Unitos' salvation, and so, like the Commonwealth the Alliance has settled near a wormhole to the holy lands.

The Disciples fear that one day, the Alliance will attempt to occupy the Alpha core for all the wrong reasons.

This faction currently has 10 rulers.

The Commonwealth have made commerce go round for a thousand years. They believe that trade is the path to a thriving universe. To them, conflict is too costly to pursue, unless it isn't. It pays off to be a friend of the Commonwealth, as they control a global trade network through their countless contacts and selection of wormholes.

Their goal is to grow their wealth and influence, preferably by peaceful means. 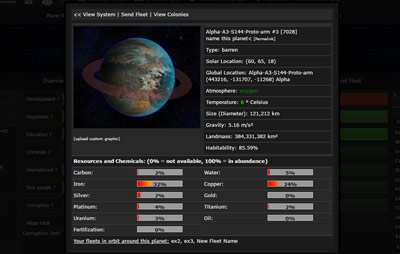 The universe is fully 3D and navigable using our proprietary 3D javasript engine.